The end of World War One meant a double reason for the Solingen knife industry to rejoice. Despite the difficult years of recession, the straight razor industry in particular experienced a great boom. Whiskers suddenly meant a nasty memory of the time on the battlefield – a time many people wanted to forget. As a consequence, many Solingen men with forge experience dared to step into independence and set up their own small razor businesses in the 1920’s.

One of them was Emil Broch, who previously had already founded the razor-grinding factory Broch & Woop, together with his partner August Woop. (More information on this company can be found here.)

Emil’s son Willy Broch was born on December 1, 1904. Whether he was a shareholder of his father’s company directly since it was founded in 1924 is not yet certain. In the Solingen address book of 1931, however, he is already named as the co-owner of the company. As Willy Broch was a merchant, this family cooperation seemed to be a winning combination for the young company.

The entry in the commercial register

On April 10, 1924, the Emil Broch steel factory was entered in the commercial register of the city of Solingen, in the sheet 928 of department A (HRA).*

In the course of the merging of the local courts of Remscheid, Solingen and Wuppertal, the registration was rewritten on May 9, 1961 to the sheet HRA 5230 of the District Court of Wuppertal. Willy Broch had been registered as the sole proprietor of the razor factory in the meantime.

On July 22, 1968, the company was finally marked as extinct. Unfortunately, no further documents (such as registrations, correspondence, etc.) are available at the District Court any more. All of the documents relating to the company have already been destroyed in 1979.

* Exactly one month later, the very first trade fair started in the newly built Cologne exhibition halls. The spring fair also offered iron products. Unfortunately, only a few exhibitor lists from the pre-war period have been preserved, and in these the company Emil Broch could not be found (same as in the company archives of the Leipzig trade fair). The proximity of the dates of the company’s registration and the first Cologne trade fair can also be a coincidence of course, but I think it at least possible that Emil Broch registered his company specifically for a participation in the Cologne spring fair.

The entry in the commercial register 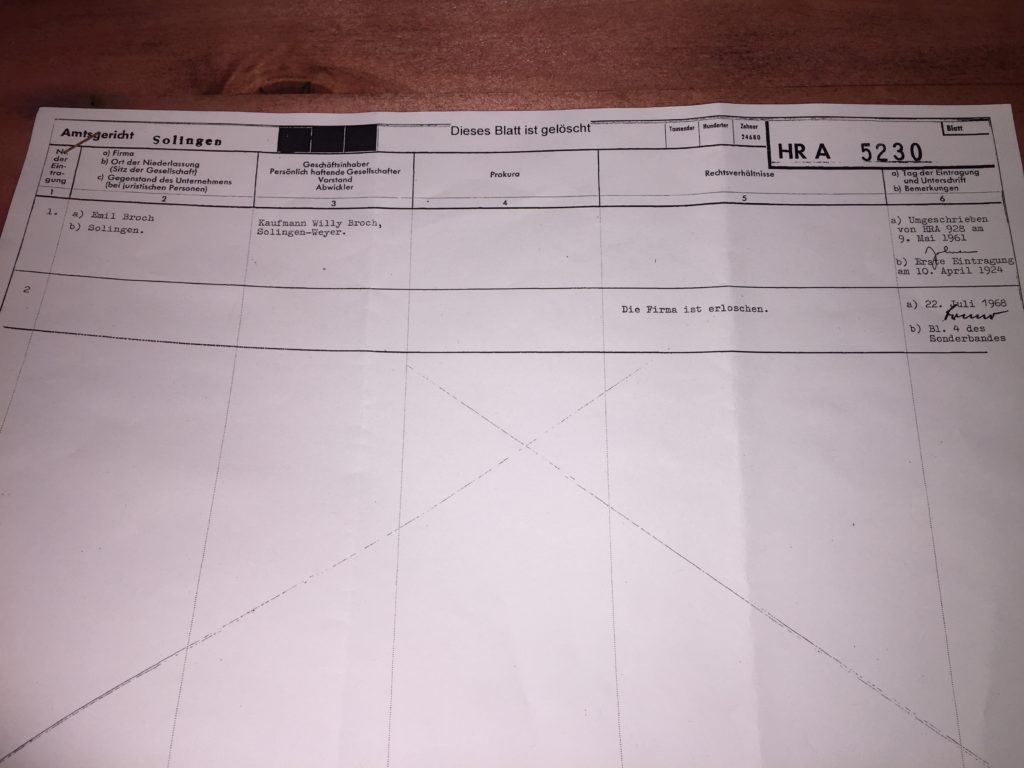