This category contains all straight razors of the brand »Bromeso« that have appeared so far. On this website, however, I can only publish photos of those models to which the respective owners and/or photographers have granted me the usage rights. (The corresponding models are linked in the table below.)
If you own a razor of the brand »Bromeso« yourself, I would therefore be pleased if you sent me photos of the front and back, as well as the permission to publish them on this page (plus, if you also agree, your name and your place of residence). A simple e-mail to Dirk[at]kain-abel-razors.com is sufficient. This way, you can help filling the »Bromeso Register« with life.

This is an overview of all razors of the “Bromeso” brand that have appeared so far:

* On the handle of this razor, a three-dimensional peacock can be seen. At first I assumed that – at a later time – the original handle had been replaced with the grip of a second razor.
In the meantime, however, I have discovered two further examples of this razor which look exactly the same. Also, I have seen numerous razors from different manufacturers – either American, British, or German – that bear the same handle. It’s therefore clear that this was a handle bought by Emil Broch for one of his earlier razors. 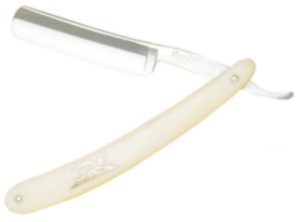