“Kain-Abel” without doubt is by far the best-known mark by the Emil Broch razor factory. To this date, at least 20 different models in more than 30 variations have appeared on the internet. In addition to these, Emil Broch seemingly created several special editions for long customers and barber shops.

There are standard models without handle inlays, but coming in different celluloid variations. Some older models are equipped with a type of seal on the handle and blade, and carrying the engraving “Schutzmarke” (“trade mark”) on the blade.

Another widespread edition I named the logo edition. On the handles of this series (at least six different models are known so far), a very detailed logo is inlayed, showing Cain’s biblical murder of his brother Abel. It’s not known whether Emil and Willy Broch themselves designed this motive, or whether they hired an artist to do so.

The best-known series, however, is the “Kain + Abel Special” edition. So far, about ten different models are known, carrying the beautiful handle inlay “Kain + Abel Special”. It is noteworthy that the hyphen from the registered trade mark “Kain-Abel” was replaced by a “Plus” sign in said handle engraving!

This is undoubtedly the most popular edition from the manufactory of Emil Broch. The blade width was basically 5/8 inches (as was the case with nearly evrey Kain-Abel razor), but various high-quality blade steels were used. One was the Böhler Extra steel of my own first Emil Broch Razor. In another model, Sheffield Silver Steel had been used. Emil Broch basically characterized the use of such a special steel by a corresponding engraving on the razor’s angle.

For a complete listing of all known models, please visit the Kain-Abel Register.

The German grip and box inscriptions on the older models of this brand suggest that Kain-Abel was first developed for the German market. However, it is likely that Emil and Willy Broch soon recognized the growing popularity of the brand, opening up international markets. Also, today’s worldwide distribution of the Kain-Abel models suggests that this brand was mainly distributed internationally in later years.

The boxes of the Kain-Abel razors were basically made of cardboard and were divided into two parts. The most common motif on the longer body of the box was the above-mentioned image logo, flanked on the left by the great word “Kain”, and on the right by the word “Abel”. Below it, in smaller writing, were the words “Trade Mark”. On the smaller box-cap, which was pushed onto the main part, the word “Solingen” was usually printed in large letters.

Presumably, each razor by Kain-Abel was delivered with an oval, 4 x 2 centimetres measuring certificate of authenticity. This golden cardboard plaque was tied to the knife with a yellow-gold ribbon. The small certificate also showed the well-known logo on both sides, flanked by the words Kain and Abel. However, the trade mark addition was slightly bent below the logo.

While the cardboard boxes are still present with many razors that have appeared so far, the authenticity plaques only seem to have survived in some cases.

It may stay a secret forever why the Broch family chose the biblical story of Cain and Abel as the name patron for their most famous word mark – a crime story about the first murder in the history of mankind. But considering the much greater success of these razors compared to the models of the Elsine and Bromeso series, the choice of name seems to have been exactly right. In the first half of the twentieth century, biblical motifs were very popular with Solingen knife manufacturers anyway.

In any case, the handle of the Kain-Abel logo edition (and nearly all of the cardboard boxes) used the previously mentioned drawing on which Cain has just slain his brother and is fleeying from the crime scene.

For those interested, here is a retelling of the biblical story about the two brothers, combined with an explanation and interpretation of the respective logo. 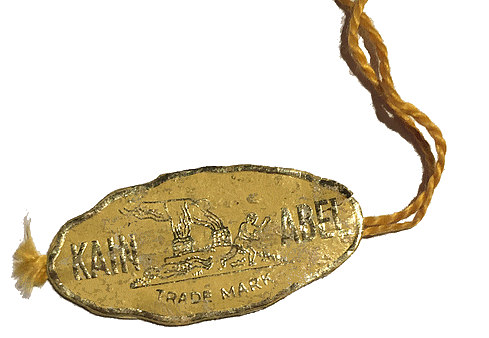